Matthew Paley has set his sights on a maroon beret after securing his dream move to join the British Army.

The Willington teenager passed his 14-week basic training in Surrey last week and wasted no time coming back to college to tell his former tutors the good news.

Matthew, 19, signed up in June after successfully completing his Level 3 Uniformed Services course at Bishop Auckland College. This week he starts a year-long training programme as a soldier and trade vehicle mechanic in Lyneham, Wiltshire.

Matthew said: “I am very excited to start my training – obviously a bit nervous as well, but I’d say I’m most looking forward to learning a good trade and travelling the world whilst doing it.”

The former Parkside Academy pupil had initially considered joining the police force but a visit to Catterick Garrison in Richmond arranged by his college tutors, and a talk on his course about careers in the Armed Forces, persuaded him to apply to the Army. 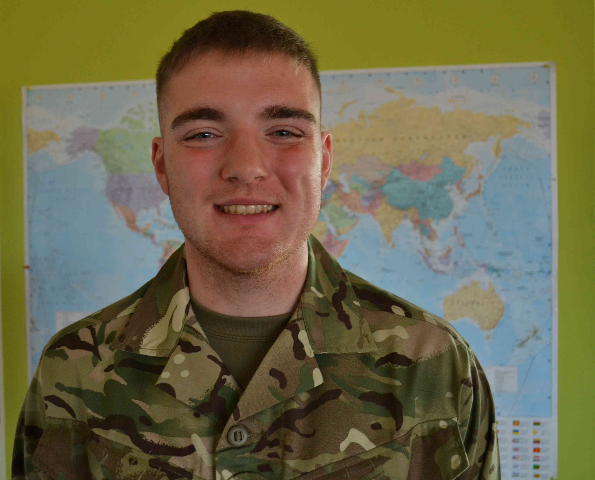 Matthew added: “I would definitely recommend Bishop Auckland College and the Uniformed Services course that I did. It taught me discipline and certain landmarks of history that made me focus on choosing the British Army as my career path.

“During my 14 weeks’ basic training based in Surrey my squadron had a trip to Ypres in Belgium and I remembered how we had covered this and other topics on my course, so I quickly went from learning about it to actually being there and being part of it.”

Matthew follows a number of relatives into the Armed Services; his nan Caroline, 65, served in the Royal Military Police in the 1970s and was a major influence on his decision to join up. He also found the name of one of his great-grandparents who served during World War One listed on the Menin Gate Memorial to the Missing in Ypres when he visited.

Matthew said he hopes to one day become an officer himself: “I popped into college last week to speak to my tutors and thank them for the support they gave me before, during and after my basic training. My long term aspirations are to obtain my maroon beret passing my paratrooper training whilst progressing as high up the ranks as I can.”

Natalie Davison-Terranova, Principal and Chief Executive of Bishop Auckland College added: “It is extremely satisfying to receive a visit from a former student who has so quickly progressed on to the job of their dreams after passing their Level 3 qualification here.

“It is so pleasing to hear Matthew felt that the Uniformed Services course prepared him so well for his Army basic training and we wish him well in his exciting new career.”

Veterans and their families are being invited to a coffee morning next week at Bishop Auckland College raising funds for the Royal British Legion. The coffee morning is being held from 10am to 1pm on Thursday November 7th at the college’s main Woodhouse Lane campus.

Bishop Auckland College has moved to remote teaching and assessment for all learners. The main College site is now closed to all visitors. Please see our 'Latest News' section for more information.

The College Nursery will remain open for the time being for the children of critical workers.

We are still accepting applications from school leaver students wishing to start in September 2020. Year 11 students are asked to provide their mock GCSE results when applying online. All interviews will take place over the phone.

If you have any questions about the above please email enquiries@bacoll.ac.uk or use our Live Chat function on our website during normal business hours.